Hello! Here’s what I’ve been up to lately (apart from the usual old write-a-thing, delete-a-thing, abandon-the-thing-and-watch-Starsky–and–Hutch-instead shenanigans)…

That’s what it used to say at the top of this site: funny books for funny girls. It was a sweet little phrase, and I liked the double meaning: funny-peculiar, funny-haha. (It was nearly funny books for peculiar girls, until someone told me not everyone sees ‘peculiar’ as a compliment. Erm.) But for a while it’s bothered me.

I strongly dislike the increasing segregation of stuff for boys and girls. I’m a big fan of the PinkStinks campaign: there IS more than one way to be a girl. When I read Shannon Hale’s excellent post about the barriers to boys reading ‘girly’ books, it struck an uncomfortable chord. (Go and read it right now; sad but brilliant.) I believe it damages both boys and girls to grow up with this blue/pink divide; I believe it damages both boys and girls to suggest that books about boys are for both sexes to read, and books about girls are only for girls – or that boys don’t need or want to read about love, and family, and how to grow up. And if I believe those things, I don’t want to be one of the people making it harder for them to get to those stories.

So. My books are about girls – but I’d love for them to be read by boys too. Because stories are for everyone, right?

New book! I spent ‘pub day’ introducing all things Pealike to lots of lovely folks down at RHCP in Ealing, being given flowers and generally made to feel like some sort of superhero.

Oxford celebrates the anniversary of Lewis Carroll’s Alice in Wonderland every year in June, and as this was the 150th anniversary, this year’s was extra-mad-hatterish. I joined in an all-day reading of the book in Blackwell’s (I got to do ‘Curiouser and curioser’, said Alice), in the fine company of fellow kidlit stars Ruth Eastham, Frances Hardinge, MG Harris and Sally Nicholls – who made a very fine Queen of Hearts. 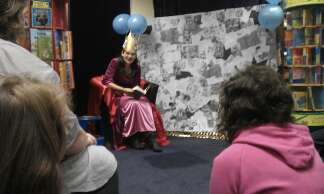 If you come to Oxford this summer, please please please visit the Story Museum on Pembroke Street, to see Tea with Alice and the steampunky Storyloom. I’m not on commission or anything, they’re just awesome.

When I heard it rumoured that multiple Mary Poppinses would descend from the sky to vanquish a giant inflatable Voldemort in the London 2012 opening ceremony, I thought someone was having a laugh. And they were, in the best possible way. 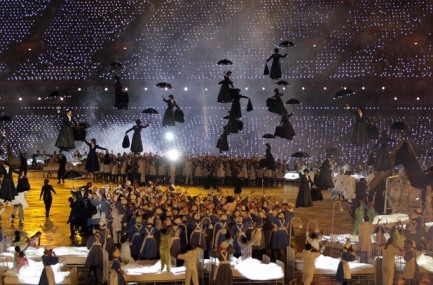 Danny Boyle’s opening ceremony was bonkers and funny, stuffed full of great tunes and powerful messages about what we really value: the NHS, childhood (and its books), hard-won personal and political freedoms. It’s hard to talk about it honestly without sounding like Kenneth More in Reach for the Sky, like some patriotic relic: we’re not much good at sincerity these days. There’s a lot wrong with this Olympics (the stranglehold of fast food sponsors, the dodgy tax breaks, the ‘oh, we’re just installing some land-to-air missiles on your roof, it’ll be fiiine’) and I’m not exactly the most interested-in-sporting-events person you’ll find – but Saudi Arabia just inadvertently showed its first lesbian kiss on TV, it’s the first games where every single nation competing has women athletes on the team, and James Bond is officially real. I’m in.

2 thoughts on “One of those round-up type things”