Sometimes a book event coincides so exactly with what you need to think harder about right. that. second. that you wonder if you’ve invented it. 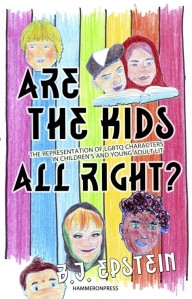 Happily, ‘Are the Kids All Right? Representations of LGBTQ Characters in Children’s and YA Literature’ with B.J. Epstein, Mark Jennett and Letterbox Library at Housman’s Radical Bookshop in King’s Cross on Saturday was not a figment of my hopeful imagination, but a fascinating examination of why LGBTQ kidlit matters, what the books we have already are doing right and wrong, and what needs to happen next – delivered in a passionate, frank and lively manner by the people at the very heart of that conversation.

BJ Epstein is the author of Are the Kids All Right?: the Representation of LGBTQ Characters in Children’s and Young Adult Lit, the first book-length study of its kind. Mark Jennett has worked extensively with the NUT and in schools, with a particular focus on challenging gender stereotypes and homophobia. Chairing was Fen Coles of Letterbox Library, which has been selling children’s books which celebrate equality and diversity for 30 years; she also announced the shortlist for the 2014 Little Rebels Award for Radical Children’s Fiction.

The question of why these books matter was swiftly dealt with. All kids are entitled to see themselves and their families represented in books, and to discover a world wider than their own; LGBTQ people grow up and want to have children themselves; the Contact Hypothesis – whereby meeting any individual from an ‘othered’ group softens entrenched views and increases tolerance – implies that these books can be powerful tools for change. And as BJ put it, however much people fear that you’ll be telling a 2-year-old about the Kama Sutra, these books are not about sex. They’re about people. (And sometimes penguins.)

How they are actually used in practice is another matter. Mark spoke of educational contexts where the LGBTQ picture books are kept in a box in an office, beside the books about bereavement and divorce, to be taken out ‘if the issue comes up’; how sometimes he is asked to tackle homophobia in a school without mentioning gay people. BJ noted US libraries creating a distinct section for queer YA, labelled ‘Loud and Proud’ with a rainbow sticker; on one hand valuable for demonstrating that such content exists and is welcomed, on the other perhaps making it harder for a questioning teen (or indeed a straight one) to pick those books up, to take them home.

The same visibility question came up regarding ‘casual inclusion’ and ‘normalising’, current buzzwords in inclusive publishing. While all saw value in incidental everyday inclusion, Mark asked whether that same-sex couple holding hands in the background of a picture book is an intelligible symbol, and noted the limited, emphatically inoffensive way those characters tend to appear (in three layers of clothes performing healthy outdoor tasks; in YA as the witty gay best friend). Fen wondered if these modes of inclusion risk blandness, and a departure from the radical battles for visibility that have characterised queer culture.

If that all sounds intensely gloomy, the sort-of-a-light at the end of that tunnel is: it isn’t our fault. The LGBTQ books we have are a reflection of the society we live in now. As prevailing attitudes change, so the books we need and the books we write will change too. Since the panel took place on the same day as the first same-sex marriages in England and Wales, there’s reason to be optimistic.

It was a packed and pacy conversation – and doubtless much less dour than this write-up sounds; there were cheerful disagreements over favoured books, and refreshing honesty about well-intentioned stories which miss the mark.  As always, it was a pleasure to see picture books analysed and taken seriously. Although it was an open-ended discussion, keen to talk around the topic and share views rather than forming rigid conclusions, here are a few takeaways about what the panel felt we need from LGBTQ books now:

The question I wish I’d asked: what about middle grade/8-12 books? I’ve yet to do more than dip into BJ’s book and I see Jacqueline Wilson and Philip Pullman listed in the index – but the discussion focused firmly on picture books and YA. It made me curious about the numbers; if that quietness is because there’s a perception that audience needs these books less, or because there are so few books to be loud about.

8-12 is where I live right now: I’m writing a book about Sam and Sammie and Mum Gen and Mum K, the Paget-Skidelskys who live next door in the Pea’s Book series. It matters so much to get those two mums right. They aren’t just parents in a little book, somehow. Sometimes as I’m writing it feels as if they have worlds on their shoulders.

But something else I took away from that event came up in the questions. An aspiring author asked if, as a straight ally, she was ‘allowed’ to write an LGBTQ protagonist; if a fantasy YA novel could have an LGBTQ protagonist. I wanted to shout YES, YES PLEASE, YES PLEASE THANK YOU VERY MUCH very loudly. (Decorum prevailed and instead I shared furtive whispers with my neighbour about the examples that sprang to mind; about all the conversations within sci-fantasy circles about that very issue.) I hope she took that message away from the panel, regardless. But it struck me that I’ve absorbed that same desire for ‘permission’ to write about a gay couple with children (I’m the gay bit, but not the couple or the having children bit) – as if all the mums and families and kids I’ve written about before are somehow different. I’m putting my own book in that special box in the school office before I’ve even finished writing it.

It’s not that simple: Mum Gen and Mum K are different from other parents I’ve written, and that matters. But that doesn’t mean I shouldn’t be yelling YES, YES PLEASE, YES PLEASE THANK YOU VERY MUCH in my own ear just as loudly.

Sometimes a book event coincides exactly with what you need to think harder about right. that. second.

The Alliance of Radical Booksellers’  Little Rebels Award for Radical Children’s Fiction is for radical fiction for children 0-12: books informed by inclusive/anti-discriminatory concerns, or those which promote social equality or social justice.

The 2014 judges are Kim Reynolds, Elizabeth Laird, and Wendy Cooling, and this year’s award will be presented May 10th at the London Radical Bookfair.

You can find the complete 2014 shortlist here.

4 thoughts on “Beyond Gay Penguins: LGBTQ children’s and YA books, past, present and future”